Picture and Nepal have a long history together!

For the last 3 years, we have provided support to the non-profit “Rêves Népalais” (Nepali Dreams), which builds schools in Nepal to provide a local solution to children who sometimes live two to three hours on foot from the nearest school.

For their project, “A school on world’s roof”, which started in 2015 in Belcot, Picture made its first donation by providing backpacks to the school’s 180 students and their teachers.
In 2016, the non-profit traveled to Kerung, to build a residence for kids living too far away from school to walk home every evening. Picture helped by supplying the poorest children with jackets and sweatshirts.

This year, to continue our commitment to Rêves Népalais, we created a new social program at Picture. This new program offers two employees the opportunity to travel on a mission for a humanitarian or environmental cause. Funded entirely by the brand, we plan to renew the program every year.

In April 2018, Laura and Estelle proudly kicked off the program’s inaugural year. Both women are based in our offices in Clermont-Ferrand, France. Laura works in our customer service department and Estelle in our export sales department. 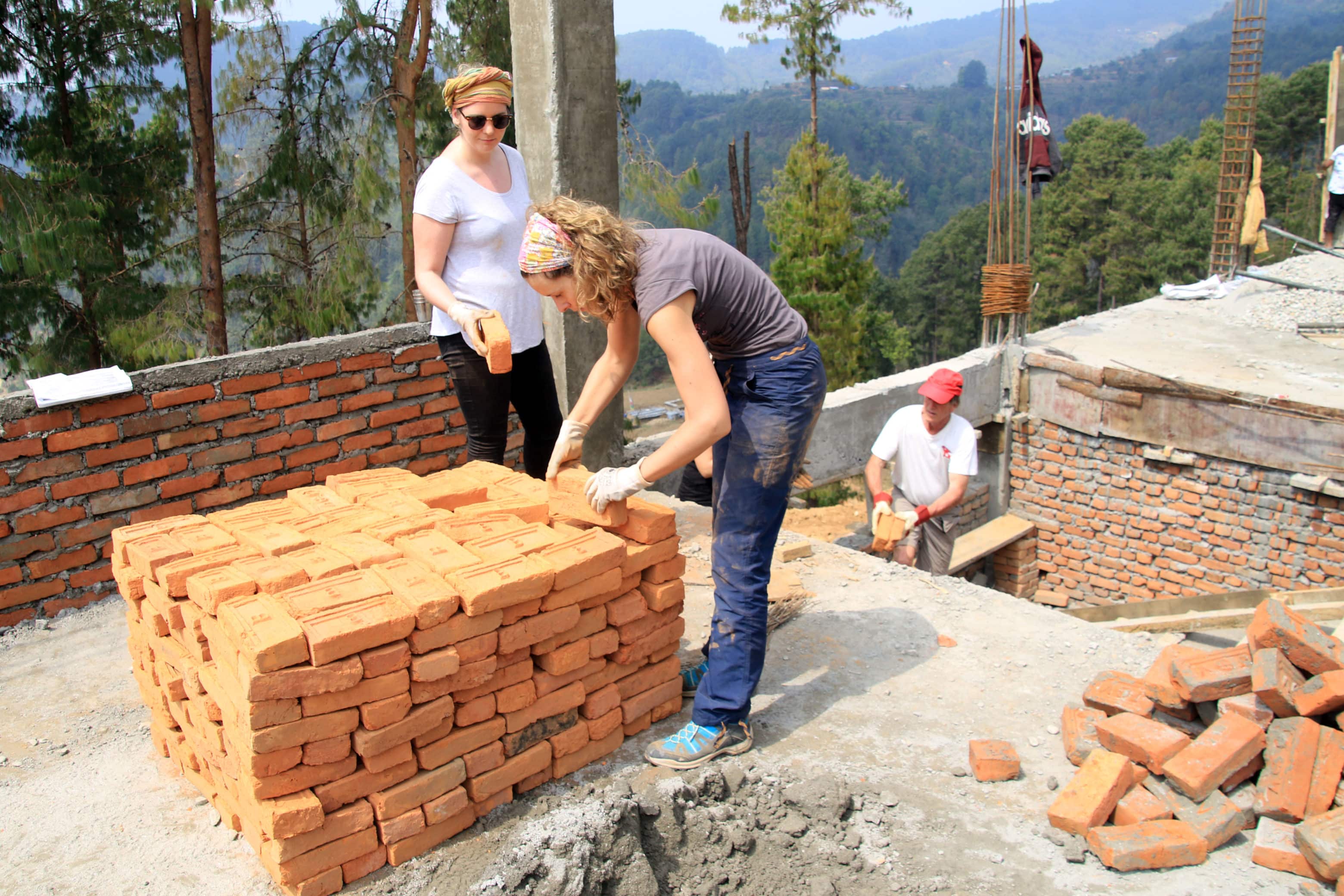 They worked with volunteers from Rêves Népalais on two main projects:

– building a new school in Sano, a small mountain village located at 2000 meters elevation and 90km from Katmandu,
– setting up a temporary medical dispensary.

The Nepali work schedule is based on the weather and supplies. For them, every day is a new day. Laura and Estelle adopted this philosophy and had the opportunity to move from one project to another based on need.

The school in Sano

Building a new school, in compliance with Nepali seismic codes, is the non-profit’s primary goal. Heavily affected by the earthquake in 2015, the village lost several homes and the school was damaged too severely to be safe enough to reopen.

Over the past three years, most of the buildings in Nepal have been or are in the process of being rebuilt, and the country suffers desperately from a shortage of materials; brick supplies are way too low to meet demand. Construction on the school, which started during winter 2017, has often been slow due to shortages in supplies.

On the first day of construction, the team divided into two groups to continue building the school’s upper floor: the first group carried up cement-making materials while the other carried bricks. They were able to lug 2000 bricks in just a few hours!

Unfortunately, the new supply of bricks scheduled for the next day did not arrive and the team was forced to reorganize: some stayed at the construction site to help workers, while a second group provided assistance to the medical team. 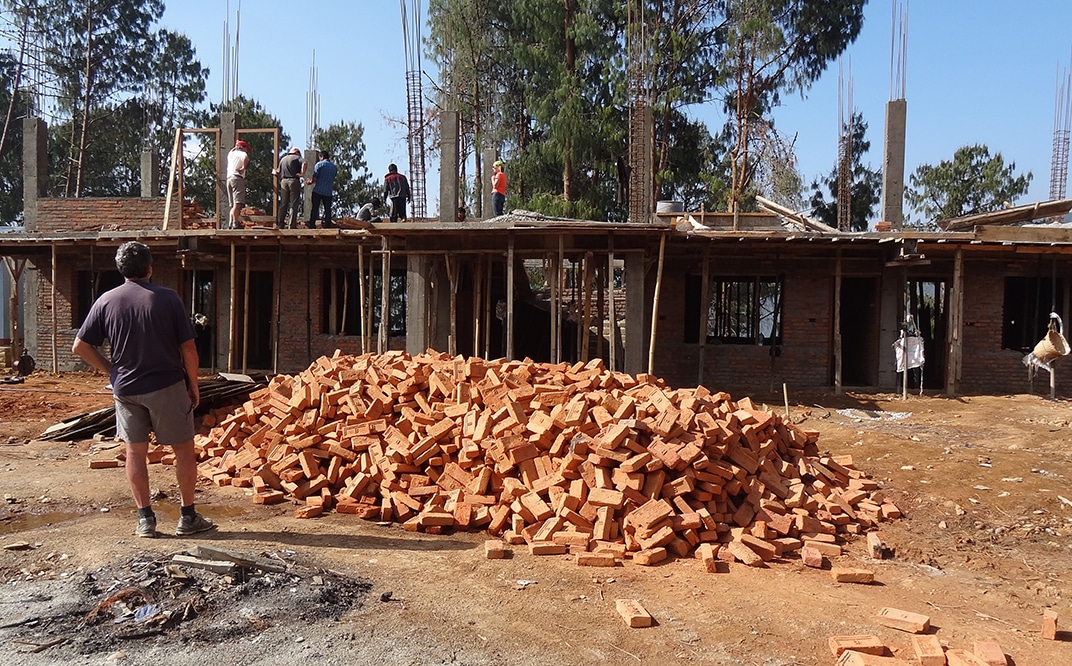 While waiting for the new supply of bricks to arrive, Estelle and Laura took the opportunity to join the medical team, which had set up a temporary medical dispensary in the middle of the village. This was Rêves Népalais‘ second mission during their trip.
The medical team included a primary care physician, an eye specialist, a kidney specialist, a nurse-paramedic, and a third-year medical student. They provided medical exams to the local population, as well as care, medicine, and glasses when necessary. For the medicine and glasses, the non-profit collected donations in France before leaving.

On the evening when Rêves Népalais arrived in Sano, the mayor told neighboring villages about the dispensary and patients showed up the next day by the dozens. Some of them were willing to walk for hours to take advantage of the rare opportunity to see a doctor or to have their eyes checked. During the rest of the year, to see a physician, their only option is to make the 5-hour bus trip to the hospital in Katmandu.

For Estelle and Laura, this was the unique chance to meet with the local villagers in person. They seconded the medical team as medical and ophthalmological assistants. They took the names and ages of patients, gathered other important personal information, measured basic vitals such as blood oxygen saturation, pulse, and also attempted, often in vain, to understand the reason for each patient’s visit.

This proved a new and unprecedented experience for both women, who not only had little medical experience, but had to learn to communicate with a local population that speaks little to no English. After a crash course to learn a few key words/expressions in Nepali, they were ready!
Other than the universally-known “Namaste”, used to say hello and goodbye, they asked for last names, “Tapayko nam ke ho?” Age, “Tapai ko umar kati ho?” and did their best to translate the answers. While patients had a variety of ailments, most were either stomach issues related to the salty/spicy food, and neck and knee pain due to difficult working conditions (carrying heavy loads on their backs every day, bad posture…).

After spending two weeks in Nepal, the project was finished and the time came to inaugurate the school. Just like 2 years ago, we donated more than a hundred backpacks to the non-profit, enough for every student to have one.

This year, the fact that two Picture employees were able to travel in country to participate in building the school adds an extra very-meaningful dimension to a humanitarian cause that we hold dear.

“Spending 7 days in a remote village where we were the only Westerners was an incredible experience. We were able to spend time with the villagers, learn about their traditions, play Carrom with the kids, speak a few words of Nepali and English with them, and even learn traditional songs; it was truly unforgettable!
The people from the non-profit were also amazing. In such a short period of time we really bonded and all hope to see each other again soon to reminisce about the wonderful 16-days we experienced together. We met altruistic people who don’t think twice about dropping everything to give their time to help others.”

The committed interview of Mat SCHAER

Making of : Shooting in Morocco

Making of: Shooting in Nepal

MAT SCHAER IS PART AGAIN OF THE NEXT ABSINTHE MOVIE !

A gateway in Basque Country

In Gora : The movie

Welcome to the Picture Family!